New data shows Australia has the lowest industrial and logistics vacancy rate in the world right now – at a minuscule 0.8% – and the sector’s popularity shows no sign of slowing.

CBRE Research found an already record-low 1.3% vacancy across Australia’s five major markets at the end of 2021 was trimmed back to 0.8% through the first half of this year, putting Australia at the top of the list, ahead of Sweden on 1.1%.

CBRE’s head of industrial and logistics research in Australia Sass J-Baleh said the rate has been trending down since the end of 2019 when it was 6.3%.

”Although vacancy rates around the globe have also fallen over the past 12 months in particular, Australia now has the lowest national vacancy rate globally, and Sydney the lowest vacancy rate of any city,” she said.

”With Australia’s highest vacancy rate in any market now just 1.4% in Brisbane, the downward movement recorded for each market reflects the current chronic undersupply.

”Australia has a relatively low share of developments that are speculative, especially compared to other major markets, so we are unlikely to see vacancy rates change significantly over the next 12 months.”

Australia also leads end-of-2021 leader Belgium, which has a 1.3% vacancy rate, the United Kingdom on 1.6% and the Hong Kong special administrative region, which has a vacancy rate of 2.3%. 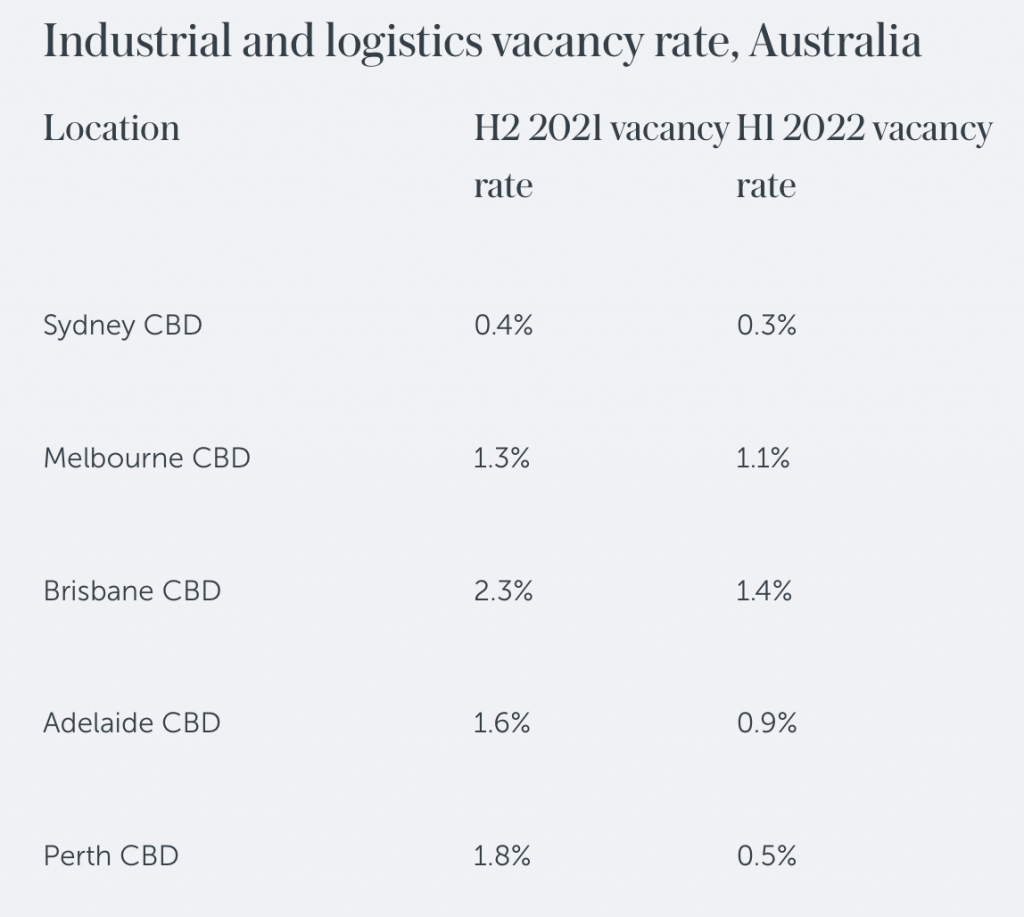 Covid boosts sector
PropTrack economist Anne Flaherty said unlike other forms of commercial real estate, the industrial and logistics sector is benefiting from the ongoing global impacts of the pandemic.

She said Covid ”fast-forwarded” the adoption of e-commerce in Australia, driving up demand for the space, while also disrupting supply chains.

”Australia surprisingly still remains well behind the rest of the world when it comes to the percentage spent online. Estimates are that we are between three to five years ahead of where we would otherwise be with the proportion spent online, so that has been a big factor,” Ms Flaherty said.

The war in Ukraine and geopolitical uncertainty which flowed from the pandemic, especially related to China, have also prompted more onshoring of manufacturing, which is aiding the sector further, she said.

”Longer manufacturing and shipping times are leading many businesses to increase inventories which requires more space to store goods.

”And in a survey of 500 senior manufacturing executives back in early 2021, 55% intended to bring some of their manufacturing processes back to Australia by 2023 and I think it’s safe to say that mood is continuing now in 2022.”

With online retail penetration predicted to continue rising and the geopolitical risks seemingly in play for the longer term, Ms Flaherty expects vacancies to remain low, demand high and rents to continue to climb.

”The outlook is absolutely strong. There is a long way to go on the upside of this. Investors are looking at capital growth, they’re looking at high rent growth, a sector in demand. The industrial boom is far from over.”

Rents heading north
While vacancy is dropping, rents are rising. CBRE reported that super prime grade rents have risen a national average of 13% year-on-year to the end of June, exceeding CBRE’s full-year forecast of 12%.

Rental growth has been most pronounced in Sydney and is sitting at 23% year-on-year, followed by a 17% rise in Perth and 14% in Melbourne.

Regional director of CBRE industrial and logistics in the Pacific Cameron Grier said the depth in demand is giving owners and developers significant choice, and only occupiers with the strongest covenants are winning the right space.

”We expect demand to continue to outpace supply this year and into 2023 and we are seeing rental growth above CBRE Research forecasts.

”New buildings in the 4000sqm-5000sqm range in Western Sydney, for instance, have broken past the $170/sqm net barrier, which is about $30/sqm more than they were at the start of the year,” Mr Grier said.

Scott O’Neill, the founder of buyer’s agent firm Rethink Investing, said rents are definitely growing off the back of the record low vacancy rates.

”We are seeing regional rents growth as fast as capital cities as well because of the lack of supply in both markets,” he said.

”As confidence has risen in the industrial property as an asset class, investors are comfortable with lower yields. This has pushed prices up faster than any other type of commercial property over the last few years,” he said.